If Sky is clear, prior landing to Tribhuvan Int’l airport you will be greeted with heavenly snow capped mountains. After custom clearance you will be welcomed by our tour coordinator and transfer to hotel.

Day 03: Fly From Kathmandu to Lhasa and Transfer to Hotel.

Early morning fly over panoramic Himalayas ranges from Kathmandu to the holy city of Lhasa by China airlines, flight takes about 55 minutes to reach the Gongar airport. Upon arrival at Gonggar airport and scenic 90km drive to Lhasa. Check into hotel.

Lhasa, the capital of the Tibet Autonomous Region is located between 29o 36'N and 19o 06' E at the north bank of Kyichu river, a tributary of the Yarlung Tsangpo River, at an altitude of 3650m above sea level. Lhasa has a history of more than 1300 years and has been the center of politics, economy, culture and religi pung Monastery was founded in 1416 by Jamyang Choje, a disciple of Tsongkhapa, the founder of Gelugpa Sect. The monastery, occupying an area of 250,000 square meters with a fixed number of 7,700 monks, is the largest monastery in Tibet. The monastery keeps many historical relics, Buddhist scriptures, arts, and crafts.

Sera means "hailstone" in Tibetan. Set at the foot of the Wudu Hill to the north of Lhasa City, Sera is comprised of a great sutra chanting hall and a college. Situated at three kilometers distance to a northern suburb of Lhasa, Sera Monastery was founded in 1419 by Jamchen Choje, a disciple of Tsongkhapa, the founder of Gelugpa Sect. The monastery was erected on a mountain slope. Sera Monastery together with Ganden Monastery and Drepung Monastery in Lhasa are known as the Three Great Monasteries of Tibet.

Jokhang Temple, situated in the center of the old section of Lhasa called Barkhor, was built in the mid-7th century A. D. It was later extended by successive rulers, and has now become a gigantic architecture complex. Located in the east, and facing the west, Jokhang is a four storeyed Temple with splendid golden roofs. Its architecture features art from the Tang Dynasty but also assimilated many features from both Nepalese and Indian Buddhist Temples. The murals in the temple depict the life stories of historic and religious characters. The temple houses many historical relics, including statues of King Songtsen Gampo, Princess Wencheng, Princess Bhrikuti Devi (Nepalese). "Princess Willow" (a tree), and "The Uncle-Nephew Alliance Tablet." Jokhang is Tibet's spiritual center, and the holiest destination for Tibetan Buddhist pilgrims. It houses a sitting of statue of Sakyamuni when he was 12 years old. The circular Barkhor Street has innumerable shops, and wayside peddlers intermingle with devotees walking clockwise around the Jokhang. An evening walk (Kora) around the Jokhang Temple together with the Tibetan pilgrims is a lifetime experience.

The Potala, one of the most famous architectural works of the world, sits on top of the Red Hill in Lhasa. In the 7th century, after the Tibetan King Songtsen Gampo married Princess Wencheng of the Tang Court, the Palace was built to provide the Tibetan court with a place of worship and meditation. In the mid-17th century, it was re-built by the 5th Dalai Lama to its present size, and became the Winter Palace of the Dalai Lamas. The construction took fifty years from beginning to completion.

The Potala is divided into two sections, namely, the Red Palace and White Palace. The total height of the Potala is 117 meters spanning thirteen storeys. The length of the Palace from east to west is 400 meters and the breadth from south to north is 350 meters. The building was constre.

It was built in the 18th century and served as the Summer Palace of the 13th and the 14th Dalai Lama. the Palace is an interesting mixture of religious and modern elements and as we walk through to see the main throne hall, an audience hall. The Dalai Lama's Bedroom and prayer room and the room for this mother. This colorful garden landscape was the site of picnic and public gatherings. The Palaces are richly decorated, creating an atmosphere of peaceful repose.

This is very interesting market and situated in the heart of the old Lhasa city with its narrow streets, white washed stone homes, windows framed in black and brightly painted wood-work and almost everyone has got something's to sell over there.

It lies 8km west of Lhasa on the main road, then 3km north and steep unpaired road. Its name Drepung means" Rice Heap" was the biggest and the richest of all monasteries in Tibet. This Monastery is said to be the largest Monastery in the world, housing over 10000 monks and Governed 7700 subsidiary monasteries and was divided into four colleges, each with its chanting hall, dormitories, kitchens and offices. It was founded in 1416 by the disciple of Je Tsongkhapa, founder of the Yellow Hat Gelukpa Sect of Tibetan Buddhism. The second third and fourth Dalai Lamas lived and were entombed here. the entire monastic communities assemble only for special ceremonies and festivals. Today, about 400 monks live there. Approaching Drepung, you will see the Nechung Temple, the home of the State Oracle. The present oracle lives in India.

After breakfast drive to Gyantse (13050 ft.) Check into hotel. This is a small agricultural town famous for its wool carpets and the Pelkor Chorten, Gyantse lies between a monastery and fort. This unique structure, built in 1414, consists of five stories representing the five steps to enlightenment, and is topped by thirteen rings which symbolize the stages of advancement towards Buddhahood. There are 108 halls inside, each with frescoes and Buddha Shrines.

is one of the biggest and beautiful lakes in Tibet. We pass by this lake with about 2 hours drive along its bank. Yamdrok means turquoise in Tibetan language. In fact, the lake looks exactly as beautiful as turquoise blue during the good weather days. This freshwater lake, unlike other Tibetan lakes, is sweet and non-saline, extending for 624 sq. km., in the shape of two pincers of a large scorpion. You can have a short stop on its bank and enjoy photography here.

Located in Gyantse and founded jointly by Kedup Je of the Gelugpa Sect and Rabten Kunsang of the Sakyapa Sect in 1418, the Pelkor Monastery has a special influence over Tibet's Buddhism owing to its unification of three different sects, the Gelugpa, the Sakyapa and Bhutan Sects, in a single monastery. The famous Kumbum pagoda, built in collaboration with Newari artists from Nepal & Tibetan artists, also stands in the same courtyard with nine story's, 108 doors and 77 chapels containing clay sculptures and various murals. The pagoda is said to have 100,000 images, either sculptured or painted, this is the reason for its name "100,000 Image Pagoda".

After breakfast drive to Xigatse - The Estate that Fulfils One's Wishes (12600 ft.) Check into hotel. It is situated between 29o 02'N and 88o 08'E in the southwest of the Tibet Autonomous Region where Nyang Chu River joins the Yarlung Tsangpo River. Shigatse is the second biggest town in Tibet and it is the center of transportation and distribution of agriculture and husbandry products from the southeastern part of Tibet. "Shigatse" in Tibetan means the "Estate that fulfills one's Wishes."

It lies 143 km to the Southwest of Shigatse. Shakya Monastery, the center of the Sakya order of Tibetan Buddhism, was founded in 1073 by Konchok Gyalpo. During the rule of the Sakyas-Pa the priest patron relationship between Tibet and China was established. Sakya-pa rulers reigned over Tibet for nearly a hundred years from 13th -14th century. Many of its priceless images frescos, statues, holy scriptures remaining today date back to the time of its founding.

Tashilhunpo Monastery is the biggest Gelugpa monastery in the Tsang region of Tibet. It is located in the town of Shigatse and was founded by Gedun Drup, a disciple of Tsongkhapa, the founder of the Gelugpa Sect. Gedun Drup is recognized as the first Dalai Lama. It was first built in 1447 and continuously expanded by the successive Panchen Lamas. The Ngakpa College (Tantric College), one of its four monastic colleges, is the residence of the Panchen lamas. The most amazing image in this monastery is the statue of the giant Maitreya (Future Buddha) erected by the 9th Panchen Lama in 1914. It took four years to build this monumental statue which stands twenty six meters high and is composed of 275 Kg. of solid gold, and a great quantity of precious things such as pearls, turquoise, coral and amber. The 4th Panchen Lama's funeral stupa was built in 1662 and it stands eleven meters high and is covered in solid gold and silver.

A new Chinese commune built at the foot of the ruins of Xegar Dzong, 7 kms. from the main road. With a population of 3000, it is the centre of this large and remote area and a base from which expeditions to Mt. Everest and other peaks are launched.

Shortly after leaving Shegar, we turn off the Friendship Highway and head south over the Pang La (5150m) towards the main Himalayan range. The view from the top is incredible with uninterrupted views stretching from Makalu to Shishapangma. Below the pass, Everest initially is hidden from view, but as we turn the corner into the Rongbuk Valley it reappears, more impressive than ever. We stay at the Gompa Guest House in Robunk.

Today we rejoin the Friendship Highway and drive to Tingri. Upon leaving Tingri, we cross another two high passes, the Lalung La (5124 m) and the Shung La [5200m]. Once more we are rewarded with magnificent views of the surrounding peaks of Shishapangma, Cho Oyu, Melungtse and Gauri Shankar. Now we begin our descent from the Tibetan Plateau to Nyalam just 30 km before the Nepalese border. With dramatic suddenness, everything appears incredibly lush and green.

Day 12: Drive 123km from Zhangmu to Kathmandu via Kodari border.

After breakfast drive to Kodari border and crosses the Friendship Bridge. After clearance at Kodari Immigration and drive to Kathmandu. Check into hotel in Kathmandu.

You will be leaving with memory of adventurous journey of the life time. We’ll make sure to turn the days to your most memorable moments of life. 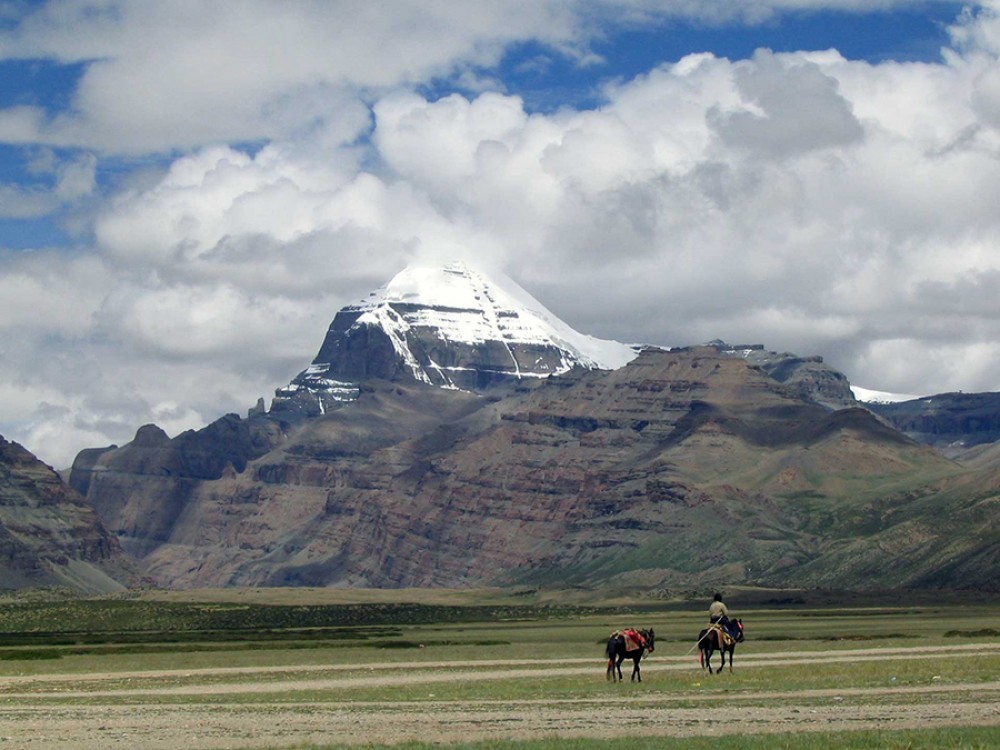 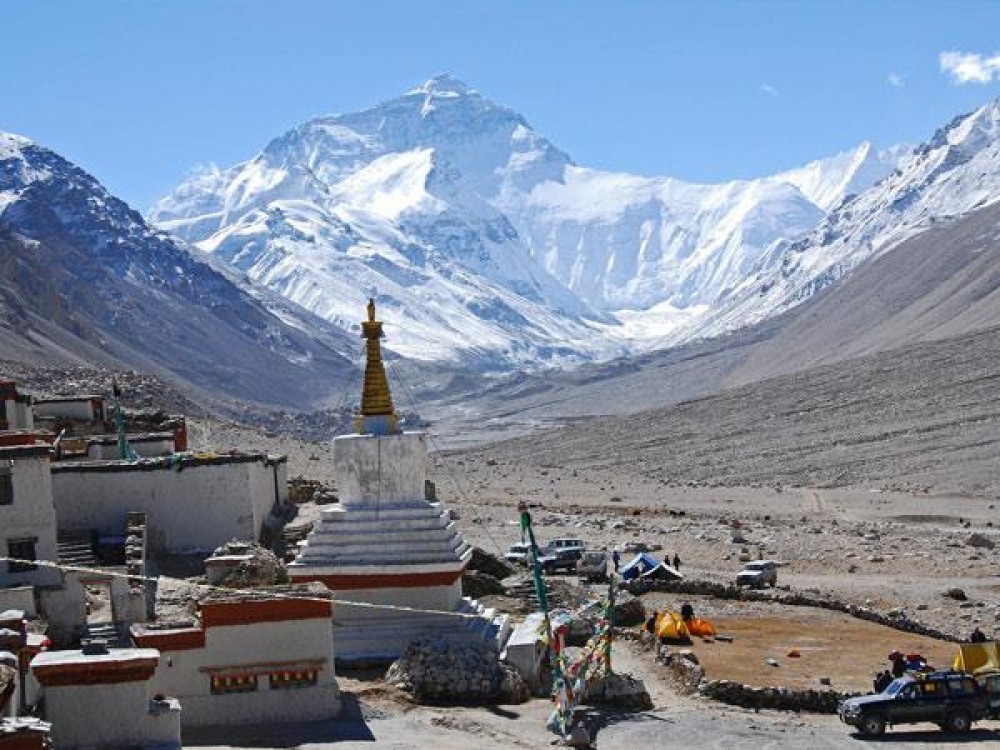